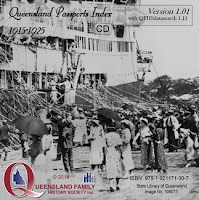 It's great to see more Queensland records being added to Findmypast - for example, the indexes to passport registers 1915-1925 and passport registers and receipts 1926-1939. Most applicants lived in Queensland but some gave an interstate or overseas address including England, Canada, Papua, Ceylon, Fiji and China.

The National Archives of Australia and Queensland State Archives hold various series of passport records. They include:


If a person 'vanished' (either temporarily or permanently), passport records are definitely worth a look. They can also reveal interesting information about overseas holidays or trips to visit relatives.

NOTE!  The transcription on Findmypast is a useful finding aid, but it does not include all details, so it is essential to get a copy of the original document. If you can't go to the Archives yourself, ask about my copying service.

For other countries, these links take you to lists of passport records on:

If you think we are related, or if you want to comment but cannot do so because of restrictions designed to block spam, please email me at the address shown here or on www.judywebster.com.au.

C is for Cooktown, Croydon and Cunnamulla

For the letter 'C' in the 'Family History Through the Alphabet' challenge, I was tempted to write about cemeteries, churc...

This work is licensed under a Creative Commons Attribution-NonCommercial-NoDerivs 3.0 Australia License.